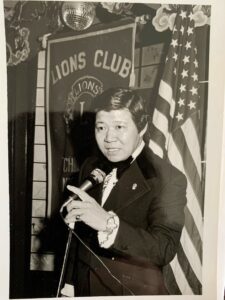 From a young age, Tony Choon understood human suffering because in-part as a Mongolian refugee in China, he struggled, with very limited food, non-existent mental health resources and no access to medicines.

Tony was born in 1937 in rural Mongolia. At the age of 5, his parents divorced. Tony’s Mother escaped her husband’s extreme physical and emotional abuse. Tony’s Father was a powerful military persona serving under Bogd Khan, ruler of Mongolia from 1911 to 1924.

In 1943, Tony, his Mom and his sister fled by foot to Taiwan, and applied for political asylum which  was granted. The family of three became displaced refugees.  In1950, Tony’s Mother began studying Law as a single Mother and went on to become Taiwan’s first female congress-lady.

At the age of 17, Tony underwent rigorous Elite Pilot training in the Chinese People’s Liberation Army Air Force (PLAAF) during “The PLAAF’s First Decade Era (1949-1960)”. Tony was patriotically committed to the PLAFF’s strategy, theory, and “doctrine”.  His honorable retirement from the PLAAF as Lieutenant colonel 中校 (Zhōng xiào) imbued Tony with a deep sense of unfinished service to humanity.

In 1966, Tony immigrated to New York City with his Mother. Years later, Tony’s Mother died of Lung Cancer due to inaccessibility to treatment and medicines.

Tony struggled with alcohol addiction and never experienced sobriety throughout his adult life. He also lived with mental health issues, but unflinchingly continued to care for others.

In 1970, Tony joined the International Lions Club District 20-R2 Chapter.  He went on to become President of the Lions Club and Tony continuing his passion to address health inequalities and inequities. Tony began to offer free Eye Care and Medical Care in support of marginalized Black and Indigenous People of Color (BIPOC) communities and underserved elderly Tri-State residents.

Tony founded the Lions Club Glaucoma Day at Confucius Plaza, partnering with The Lions Club, New York City, Downtown Beekman Hospital, PS.2 and NYC hospitals and served over 25,000 patients each year at the annual 3 day weekend Glaucoma Day. Tony inspired his 2 daughters Mimi and Lulu to join the fight against blindness and fight the injustices of unmet medical needs and humanitarian compassion. In 1990, at the age of 53, Tony died from a hemorrhagic stroke.  His wake and funeral services was attended by many politicians, community leaders and over +1000 people who joined the Choon Family to celebrate Tony’s life.

HELP US FIGHT THIS INJUSTICE!