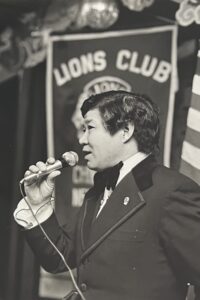 From a young age, Tony Choon understood human suffering. As a Mongolian refugee in China, he struggled with the scarcity of basic resources. Tony was born in 1937 in rural Mongolia. At the age of 5, his parents divorced. His mother escaped her husband’s extreme physical and emotional abuse. In 1943, Tony, his mom and sister fled by foot to Taiwan, where they applied for and were granted political asylum. The family of three became displaced refugees. In 1950, Tony’s Mother began studying Law as a single mother and went on to become Taiwan’s first female congress-lady. In 1966, Tony immigrated to New York City with his mother. 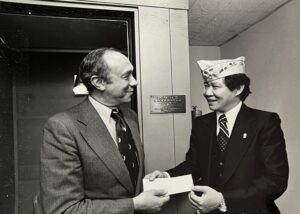 Years later, Tony’s mother died of lung cancer due to inaccessibility to treatment and medicines. In 1970, Tony joined the International Lions Club, a non profit organization founded in 1917.  Tony began to offer free Eye Care and Medical Care in support of marginalized and underserved communities and residents in the Tri-State area. Tony expanded the Lions Club’s outreach by founding the Lions Club Glaucoma Day, in partnership with NYC hospitals which served  thousands of patients each year . From then on, Tony inspired his 2 daughters Mimi and Lulu to join the fight against blindness and fight the injustices of unmet medical needs with humanitarian compassion.

After the passing of Tony in 1990, Mimi became empowered to carry on her father’s philanthropic legacy by starting Partners for Patients. From its founding, PFP has become an internationally recognized nonprofit that provides care for society’s most vulnerable. We look forward to sharing Partners for Patients projects that strive to promote solutions for societal inequities.